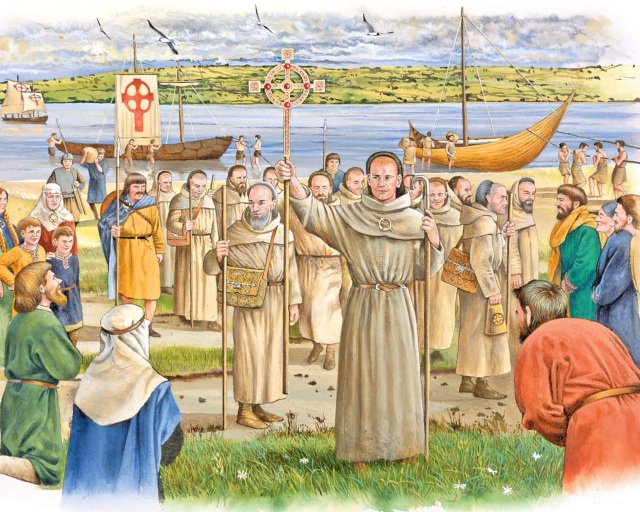 Lindisfarne or the Holy Island is where Saint Aidan brought Christianity to Northumbria. That it should be the site of murder is shocking, & that the victim should be a young woman apparently killed in a ritualistic manner & left on the altar of the parish church deepens the sacrilege. Because the island is inaccessible except by boat during times of tidal high water, the range of suspects is quite limited. All of which makes for an excellent location for a mystery story.. My take is a bit mixed. Of course, having once visited the site myself in the company of a priest from Kelso – an American Episcopalian & a Scottish Episcopalian @ the holiest place in England – I was eager to read this one & I loved the descriptions of the setting, tho’ disappointed that the CofE vicar proves rather a weak reed.

What I liked; Most definitely the setting. The sense of being on a tight little island came through well, especially at the Christmas season. Tho’ on the audio DCI Ryan speaks pretty much what used to be called Received Pronunciation, most of the other characters speak a Northumberland dialect which is absolutely priceless. Anna the forensic archaeologist was attractive & likeable, tho’ as usual in such stories, has to confront oafish men who won’t take her scholarly expertise seriously. That she would be the sister of Megan the island femme fatale & murder victim seemed a bit of a stretch for me. I spotted the principal villain early from one clue (which I give away in the spoiler thread for the August Kindle English Mystery Group read). But there were enough suspects & subordinate villains to keep me on edge. Personally I found DCI Ryan a bit of a cliché – officer suffering from PTSD from last case, has he been called back in too soon?

What I did not like: The holiest & most ancient Christian foundation in England & there is just about zero Christian spirituality – Celtic or Anglican. (The vicar in the book is a squib as damp as the bottom of the North Sea. I’m sure the real incumbent must do a better job.) Given the general state of spirituality in contemporary England (Christmas is celebrated as an excuse to stay drunk from Christmas Eve till the day after the New Year), I was not surprised, but still disappointed. Anna, as an expert on neolithic beliefs, objects to using the p-word to refer to how people worshipped before Christianity, but as practised in this story, I had some trouble really believing in any p*g*n spiritualIty. I also found it inconceivable that Ryan, an inexperienced sailor, could have navigated a small boat out to the island in a major storm. At night!

But @ the end of the audio version there is a foretaste of the rest of the series, & tho’ tempted I’ll not go there, many might enjoy the continuations. Given my spiritual expectations, I’ll hold @ three stars, but lots of us would give it four.