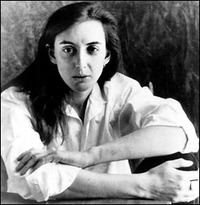 Besides House Rules, Heather Lewis left behind two more novels; no horses, but like in House Rules very violent sexual episodes and a lot of drugs. Both offer as principal characters a wealthy couple who are addicted to sexually abusing teen-aged prostitutes. The Second Suspect is an apparent police procedural investigating the death of one of these girls. The other novel, Notice – published only after the author’s suicide – is a 1st person account by a teenaged prostitute who specializes in servicing businessmen commuters @ a suburban railway station car park. The two books are obviously closely related & artistically it makes sense to connect them.

Heather Lewis was Allan Gurganus’s creative writing student @ Sarah Lawrence. That of course was also Lucy Grealy’s alma mater @ about the same time, but I’d imagine they would have hated each other cordially. But they seem so similar, except that Grealy was outwardly maimed & Lewis wore her scars on the inside. Both died @ about the same time. It’s not clear that Grealy’s death was deliberate, as if the death of a heroin user were ever anything else. Lewis hanged herself with the sash of her dressing gown. (Gurganus calls it a “silk bathrobe” but in my idiom if it’s silk, it’s a dressing gown.) According to Gurganus’s afterword, “Notice had been adjudged too dark & disturbing in its bleak sexual frontally [sic] to prove in any way commercial.” Both House Rules & Second Suspect were edited by Nan Talese. Tho’ I’ve now tried to reform & read books for pleasure only, I still know how to do literary analysis & divined what happened as that Talese got Lewis to rework the entire concept and turn it into a mystery story with a police detective Caroline Reese as the central character & the narrator of Notice morphed into a subsidiary personage. (I am grateful to Robert Nedelkoff for confirming & providing some corroborating sources for my conjecture.) The girl in Notice never tells us her name but in Second Suspect she calls herself Lyn Carver, probably an alias, but it is the name I shall use also for the narrator in Notice. In both books the wife in the sadistic couple in named Ingrid, & she calls the teenager prostitute they abuse Nina, the name of their daughter, killed by her father either purposely or from erotic strangulation that got a bit out of hand. He is nameless in Notice but in Second Suspect is called Gabriel Santerre, & is the head of a pharmaceutical empire. His favorite kink is binding women’s necks & wrists with his own belt, then penetrating them anally, tho’ he prefers to ejaculate on their face & breasts. When he wants to put the frighteners on them afterwards, whether to insure their silence or just out of sheer sadistic nastiness, he employs a couple of hench-persons who like to cut. In Notice a character carries a piece of Lyn’s flesh (probably from her labia) in a vial on a chain round his neck; in Second Suspect it’s worn by Gabriel.

Notice offers us very little background detail. The narrator is a teenaged girl working as a waitress, but also as a lot lizard on the parking lot of a suburban railway station, servicing commuters in their cars. As her parents are wealthy, absent abroad & give her the run of their house & liquor cabinet, she seems to work @ the waitressing & sex trades only for independence & excitement. She agrees to go with one of her customers to his nearby mansion to play kinky games with him & his wife Ingrid. Next day he leaves her & Ingrid alone together & they form a relationship. Ingrid gives her several hundred dollars (later quite a lot more) & she leaves before Gabriel comes back. Later she goes back to working the station car park, where she is arrested by a couple of undercover vice cops who rape her & take her to jail. Apparently they were dispatched by Gabriel to teach her a lesson. Afterwards she is sent to what is supposed to be a rehab center where she is placed in “seclusion” (i.e. solitary confinement) till she is rescued by a therapist named Beth, whose husband is someone in the DA’s office. After she is released, she has relationships with both Ingrid & Beth, characterized by a pattern of extremely violent & aggressive sexual episodes followed by scenes of tender & caring lovemaking. So she alternates between top & bottom, aggressor, victim, lover & beloved, tho’ she never uses the word love; love’s a total non-starter, persona non grata for her. Notice ends after Burt & Jeremy, who’d 1st seemed generous suppliers of free drugs but prove to be Gabriel’s minions, abuse Lyn horribly, but leave her still unwilling to kill herself out of despair.

Second Suspect apparently takes place later. Gabriel & Ingrid are in a hotel room in New York with a dead teenaged girl prostitute whom Gabriel attempts to smuggle out in a golf bag, but unexpectedly Ingrid calls the cops. Gabriel, possessed of considerable political clout & a sleazy fix-it lawyer, attempts to cast the blame on his wife. Caroline, a police detective under a bit of an institutional cloud (her former partner had got a little too heavily into the drugs they were investigating & she had to kill him in self-defense), gets her lawyer BF to represent Ingrid & attempts to find out what really happened, which leads to the discovery of a number of teenaged prostitutes living in apartments owned in Ingrid’s name, as well as a girl now retired (@ about 20 too old to appeal to Gabriel & Ingrid’s sexual tastes in daughter surrogates) calling herself Lyn Carver, now living in a big house in Westchester County apparently subsidized by Gabriel with the understanding she will remain silent about her previous association with that couple. I read Second Suspect 1st, but just as soon as I began Notice it was obvious the narrator was her model, but now she’s recycled & a few years older.

Artistically I have no doubt that Nan Talese’s judgement stank & that Notice is the better book & that the voice of the Lyn character in Notice is far & away more vivid & affecting than the 3rd person POV mostly from the police perspective in Second Suspect. But I honor & respect Talese. She had a job to do, publishing houses are in business to make money not to foster literary art, & an editor has to be decisive. Also, the ending to Second Suspect, when Lyn puts herself into the hands of Gabriel, would have made the superb finish that Notice fails quite to achieve. She goes in not quite totally intrepid & clean. She’s carrying a lethal dose of heroin in a bag tucked under the top of her stocking – with a sadist who loves to cut, a girl had better have a plan B.

But the end turned out perfect. As an editor sometime myself, I’d love to have had the chance to try to help Heather Lewis knock these two into one terrifically moving novel. As it is, Notice lacks the beauty of House Rules; there is no possible equivalent for the erotics & grace of equestrian competition when the main character is a teen hooker. But like Lee in House Rules, however much pain Lyn endures in Notice, she never loses our admiration & respect. Always ready to plunge in, headlong, fearless, with no safe-words, working without a net. That’s why I find these characters, & the story of Heather Lewis herself, so attractive & affecting. In Notice, Lyn describes a force within herself that she calls “the Leviathan” that impels her recklessly into extreme situations. She denies it is a “death wish” but I think I know what it is. To gaze unflinchingly into the abyss is the object of mystical spirituality. The drugs & violent sexuality are signs that the author & her characters wandered off the path, but they had the right intention.