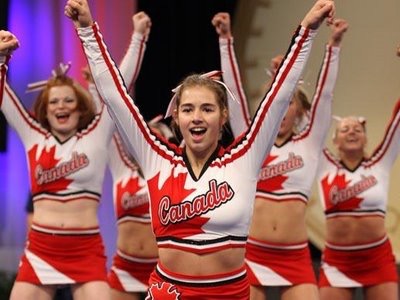 Reading Exit, Pursued by a Bear, I was haunted by continual recollections of another sch ool story about a cheer captain, Megan Abbott’s Dare Me. Judging from the reviews on Amazon, we see Dare Me provokes equally extreme reactions from readers: half love it & half hate it & I expect many who hated Dare Me would love Exit, Pursued. In Dare Me the principal character, Beth, is an indomitable Nietzschian determined never to yield to anyone. Ironically, because Dare Me is a tragedy, Beth’s unshakeable will leads to her becoming in the end a victim herself. Hermione in Exit, Pursued is a seeming victim who refuses to allow herself to be used like one; after being drugged and raped @ cheer camp, she receives the support of an entire community, police, doctors, nurses, parents, BFs, psychiatrist, even a clergyman, who is okay with her decision to have an abortion.

The differences in flavours between Dare Me & Exit, Pursued emerge clearly in the speeches the captains deliver to their squads just before they go into competition. Both speeches work like Henry’s “we happy few” before the battle of Agincourt in Shakespeare’s Henry V.

This is Hermione, as the Palermo Heights Golden Bears prepare to perform in the Canadian nationals: “Listen up. . . . This is our day. We didn’t have to come across the country or even that far across the province, because this is our day. We’ve practiced for this and trained and thought. . . . Each & every one of you chose to be here. You all chose to try out when the competition was stiff. You chose to give up ever sleeping in so we could practice in the mornings. You chose to limit your social life. You chose to make your teammates your friends as well. And you chose today. I’ve asked a lot of you all on the floor & off this year. And I’m going to ask one more thing. . . . Choose to go out there with me one more time. Choose to do your best. Choose to trust your team. Choose to win, & I know—I know—we can.”

And now Beth @ the Sutton Grove Eagles last game of the season; they’ve learned that a scout from the regionals is in the stands: “Tonight, you’ve got to spill their blood . . . or I promise you, they will spill yours. . . . Brace those arms. Bolt those knees. Look at that crowd like you’re about to give them the best piece of ass they ever had. Sell it. . . . Bases, eyes on your Flyer, she is yours. You lock her to your heart. You lose her, blood on the mat. She is yours. Make her. . . .You fail, you fail all of us. So you will not fail. . . . So stiffen the sinews, summon up the blood. We’ve come to bury them. We’ve come to plow their bones by the final bell. . . . It’s harvest day, girlies. . . . Get busy when the corn is ripe.”

If they were wines, Dare Me is one of those over-oaked powerful Napa high-alcohol Chardonnays with the punch of a depleted-uranium armour-piercing anti-tank round. Exit, Pursued is a light smooth Riesling. I enjoyed both. I read somewhere that Megan Abbott got her original idea for Dare Me to try to set Macbeth in an American high school, tho’ practically no traces remain except for the principal character’s first name. Hermione’s name & the book title are allusions to The Winter’s Tale, one of Shakespeare’s later plays that we classify as romances. Tragedy portrays a world that is cruel, excessive & merciless, yet inevitable & right. Appropriately for a book set in Canada, as I was reading Exit, Pursued the presence of the famous Toronto critic Northrop Frye was constant visiting spirit. What makes stories like this romances is that what appear to be tragic resolves happily, the villains are punished but mostly offstage and the apparent victims saved & the lost recovered. If you like, you could say that romance portrays the world as it ought to be. For Frye & for me, the perspective is essentially Christian in that evil is made to reveal a greater good.

Some readers hated Beth but I admire her will & her resourcefulness & courage. Sometimes I thought I found Hermione bland, but actually she is very courageous too. Fortunately the author E. K. Johnston portrays a small town in Ontario as part of a society that offers a good system of support of Hermione, & in Polly Hermione has a BF who is everything you could ever want in a friend, whereas Beth’s BF Addy will betray her. That’s the difference between the worlds of romance and of tragedy. But Hermione & Beth are both inspirations & models. When you’re facing something horrible but have family & friends & caregivers, ask yourself what Hermione would do & then get up & have the strength to do it. But when you’re all alone, no one has your back & there’s nothing before you except the abyss staring @ you, do what Beth would do – don’t let the abyss intimidate you, you intimidate the abyss.