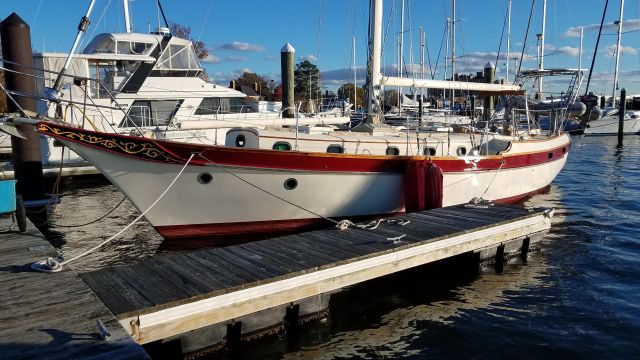 This kind of book is a rarity for me: a book I didn’t like till I found nearing the end that I did – very much. Reading a newspaper review persuaded me that the author probably didn’t know enough about sailing or sailors, especially offshore sailing, to write a believable sea story, and my suspicious were aggravated by the husband’s being a Trumpian. (Michael’s inchoate – so seldom get a chance to use that word – political opinions seem a mixture of libertarianism and Nietzscheism.} Wife Juliet is that very familiar figure, the doctoral student who can’t finish her dissertation (on Anne Sexton) turned stay-at-home mom. They have two young children, seven year-old Sibyl and Georgie “Doodle,” three. Most annoyingly, Michael gives them all pseudo-nautical designations of rank. Juliet is “First Mate,” Sibyl in “Bosun” (it’s actually spelled “boatswain”), and “Doodle” is “Deckhand” – of course real ocean sailors don’t indulge in such silliness – only dentists “driving” power cruisers on Long Island Sound. Michael’s mid-life crisis takes of the form of imagining the family going round the world at sea, though fortunately since Juliet has never been on a boat and Michael’s previous experience was day sailing on Lake Eire, they begin with coastal passages in the Caribbean. The tale is narrated to two voices, Juliet speaking in first person after her return to Connecticut and Michael’s very verbose entries in the yacht’s log. The boat is an CSY 44 Walkover (the latter term referring to the cabin  layout below deck, not to the boat’s competitive abilities), renamed the Juliet. Definitely too much boat for a couple, especially when one of them doesn’t know how to sail.

For a reader who knows something about sailing boats, the narrative is often disconcerting, especially as the reader for Juliet couldn’t pronounce mainsail, leeward, or Caribbean, and kept referring to the masthead windspeed indicator as the flywheel. Besides his crude political views, Michael’s vocabulary is too often that of a middle-school boy. He refers to being self-absorbed as “being wrapped in my own shit” and small talk as “shooting the shit” (gross!).

The descriptions of sailing and handling the boat were also unconvincing, especially when they run into heavy weather and Juliet is supposed to be reefing the mainsail and helming the boat by herself. But I felt the author made a serious effort to research her subject and introduce realistic detail even if she doesn’t always get their names quite right. But though we know from almost the beginning that the trip will not end entirely well, readers should remain rivetted to discovering the outcome. And I found it surprisingly stirring.

There is an easy test to find out if you have the mentality of offshore sailing in the deep ocean. Download the movie Adrift and watch it at home. That is what Michael should have done. After you’ve watched it, ask yourself if you knew that your passage might turn out like that, would you go?  Then, ask yourself, if you can foresee that it definitely will turn out like that, then would you still go? The voyage of the Juliet is not quite so eventful, but at the end I was persuaded the Juliet had underwent a sea change into a real sailor.