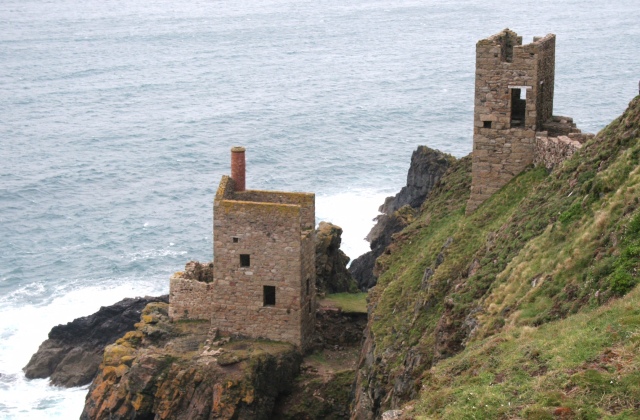 Most of the of progeny of Daphne du Maurier’s Rebecca bear the same resemblance to the original as those “Rolexes” you can buy in Hong Kong. Not The Fire Child. It is a genuine Patek Philippe: the best contemporary gothic I have ever read. Mysterious haunting ruins are a staple of the gothic, & the remaining towers of the abandoned tin mines on the wild Cornish coast one of the best & most moving sights in England. (The Cornish aren’t really English, but their language, akin to Welsh, died out early in the 19th century, tho’ some enthusiasts have tried to revive it.) The ruined towers were situated on the coast so the mine shafts could stretch out under the ocean. The thought of the toil, danger, hardship & care the miners endured so that the family of the mine owner could live over them in a mansion (with 78 bedrooms!) makes one understand why people turned Bolshevik. (The old photographs, along with some new ones by the author, add an especially spooky touch – the one of the miners on p. 354 really got me.) Following the traditional formula, Rachel, a working-class almost-30 woman from a very dysfunctional family in South London, has married David, the scion of the mining aristocracy, tho’ the family fortune is gone & David is trying to restore Carnhallow (our Manderley knockoff) by overworking himself in London as a City solicitor. (How, we wonder, does he preserve his ‘muscular’ body Rachel loves with a 12-hour desk job fuelled by alcohol?) The previous chatelaine, Nina, perished mysteriously by falling down a mine shaft – leaving an 8 y/o boy Jamie, for whom his new stepmother experiences an immediate attraction. But Jamie seems obsessed with the memory of his mother, who has a grave site in a churchyard, tho’ no body was ever recovered. There is also a grandmother, Juliet, who serves as a communal memory like Mrs. Danvers, tho’ unlike Danvers, Juliet is an attractive character & her memory seemingly impaired by the onset of dementia. Is it possible that Nina could still be alive? Rachel thinks she caught a vision of her on a bus. Could Rachel be going insane? Is she slated for the role of madwoman in the attic? (The same turn occurred in Judy Finnigan’s Eloise.) All the traditional elements of gothic fiction are present in The Fire Child, but they are prepared with fresh & delicious ingredients & presented with a brilliant twist that is both ancient (King Oedipus & Tom Jones are classic prototypes) & up-to-the moment.

Personally, I find our fascination with plot twists in fiction overdone. ‘I never saw that one coming’ is a frequent term of praise in reviews, but I think more is required for the real literary pleasure that comes only on a 2nd reading. I like a twist that raises what has already been an acceptable but seemingly routine plot to a new artistic level. It is less important for me that I didn’t see the twist coming but that it makes all the elements of the plot come together seamlessly & suddenly. Also, the twist should not depend too much on mere coincidence or accident, but feel inevitable & right, what in hindsight must happen. In The Fire Child, the author achieves both brilliantly. I loved The Ice Twins, but find The Fire Child even better. It is completely faithful to the settings, characters & plot elements of the traditional gothic, & yet strikingly new & original.

2 thoughts on “Review of The Fire Child, by S. K. Tremayne”